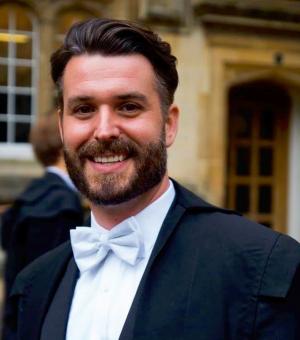 Tyler's dissertation project, "Critical Materialisms: Power, Place, and Personhood in White and Black 'Red' Spaces," offers a theoretical intervention into the limits and assumptions of (post)humanist knowledge production in the mainstream study of religion and 'the secular' following critical Black and Native intellectual traditions.

Tyler M. Tully is a doctoral candidate in religious studies and the Arthur Peacocke Graduate Scholar in Science and Religion at the University of Oxford. He is an Oklahoman of settler and Native (Chickasaw) descent whose interdisciplinary teaching and research engages intersecting entanglements between religion, race, gender, science, and colonialism. Tully earned a BA in Religious Studies and Theology from Our Lady of the Lake University in San Antonio, Texas before earning his M.Div. with Distinction from the Chicago Theological Seminary where his research thesis explored critical theories of trauma, affect, and animality. In 2020, he will be co-editor of a special issue on race and climate change in the international journal Politics.

“Settler Similarity and the Science of Difference: Human Identity in an Age of DNA Testing,” The Religion Factor, University of Groningen. January 2019.

“Review of Brianne Donaldson’s Creaturely Cosmologies: Why Metaphysics Matters for Animal and Planetary Liberation.” Journal for the Study of Religion, Nature and Culture 12(1): 109-111. March 2018.

“Epistemologies of Trauma: Cognitive insights for narrative construction as ritual performance,” in Bulletin for the Study of Religion 46, no. 3-4 (2017): 48-56.

“‘And the Word became flesh’: How deep is the Incarnation in light of biological evolution?” Reading is Believing? Sacred Texts in a Scientific Age, The Faraday Institute for Science and Religion, University of Cambridge, UK (2018).

In addition to his studies, Tyler has served as a peer reviewer for the academic journals Secularism and Nonreligion, the Journal for Critical Animal Studies and Perspectivas. Tyler is also a former elected member of the University of Oxford’s Faculty's Graduate Joint Consultative Committees, Oxford's First People's Collective, and the Oxford Graduate Theological Society. He is also a perpetual member of the Alpha Chi National Honor society, the North American Society for the Study of Religion, and the American Academy of Religion.

Areas of Teaching Competence and Experience: