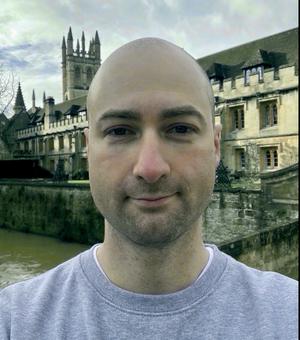 Kierkegaardian Selfhood as Pursuit of the Greatest Commandment
DPhil Candidate in Theology
dallas.callaway@magd.ox.ac.uk

I am from Calgary, Canada and I completed my BA in Psychology, earning First Class Honours, at the University of Calgary with a thesis on language acquisition and affective paralanguage in children. I then completed an MA in Clinical Psychology at Louisiana State University, earning distinction with a thesis on ambivalence and emotional phenomenology in individuals diagnosed with schizophrenia. Taking leave of the world of academic clinical psychology, I then worked as a disability services consultant as well as an academic administrator before completing an MSc in Philosophy, Science and Religion at the University of Edinburgh. My MSc dissertation was awarded with distinction and juxtaposed Kierkegaard’s conception of selfhood with that of ‘Left Hegelianism.’ I began my doctorate at Oxford in 2020. O, joy, a global pandemic.

Callaway, Dallas A. “Review of ‘The Severity of God: Religion and Philosophy Reconceived’ by Paul K. Moser.” Journal of the Oxford Graduate Theological Society, no. 2 (in press).

Callaway, Dallas A. “Two Ships Passing in the Night? A Historical Analysis of Nietzsche’s Inauspicious ‘Non-Engagement’ with the Writings of Kierkegaard with Respect to Truth” (under review).

Callaway, Dallas A. “Kierkegaard’s Relation to Nihilism and the Point of View of ‘Left Hegelianism’” (under review).

Callaway, Dallas A. “Death and Life are in the Power of the Tongue: Kierkegaard and Žižek on ‘Eloi, Eloi, Lema Sabachthani?’ or ‘My God, My God, Why Hast Thou Forsaken Me?’” Magdalen College Trinity Term Research Colloquium. Oxford, England (June 2021).

Callaway, Dallas A. “Engaging Political and Ethical Life from the Point of View of the Sickness unto Death: Kierkegaardian Selfhood and the Presupposition of God.” 2021 Postgraduate Conference of the Society for the Study of Christian Ethics. Oxford, England (March 2021).