Is it OK for theologians to mock death? 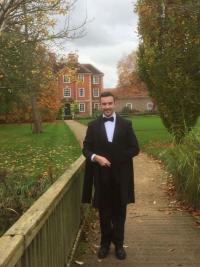 When I was ten years old, I was called out of school one day and taken to the hospital. It was my dad.  After six years, filled with two major surgeries and countless radio and chemotherapy appointments, the cancer which began in his colon had finally metastasized to the area of his brain that controlled his ability to speak. Arriving in his room, we read the words he had scribbled onto a piece of paper: “I love you,” as the doctors explained that this was the beginning of the end. A month later, he would pass away while I was at summer camp, and our family would begin the long process of adjusting to our ‘new normal.’

It was this experience, and others like it, that made me wary when I received an email in December 2016 from Harry Househam, the director of the Oxford Imps. (For more about the Imps, and how my experience in improvised comedy has helped train my theological sensibilities, you can read here.) He was proposing the theme of our annual Hilary Term show, which he had entitled: Dead Funny: An Improvised Funeral. We would create a funeral together for a fictitious, deceased character, whom the audience members (doubling as funeral attendees) would help create based on their suggestions. I remember thinking, “Whoa…can we do that?” What would people think? Would it be insensitive to the deep traumas of people like myself who had lost loved ones? How could we possibly put the “fun” into “funeral?”

But the more I thought about it, the more it made sense, especially from a theological perspective. For the writers of the Hebrew Scriptures, one of the things that had made death so awful was the way that it threatened to perpetually and permanently erase people and their work from the land of the living. The writer of Psalm 90 expresses this sense using several powerful metaphors: because of death, time is like a flood that drags away from us all that we hold dear. Our lives are like transient dreams, like the flowers that bloom in the morning and fade in the evening (cf. vv. 5-6).  The writer of Ecclesiastes made the point even more strongly: because of death, our lives were as vain and futile as smoke.

But with Jesus Christ, Christians became convinced that God was determined not to let death have the final word. Instead, he had used Christ’s death to undo death, to remove the curse that had left all of creation in futility. And Christ’s resurrection from the dead was a foretaste of what would one day happen to all of creation. In the light of that momentous event, St. Paul helped bequeath to the West its belief that death is not the end, that funerals can be occasions not only for expressing the grief of loss but also for tentative, hopeful celebrations of what was accomplished (cf. 1 Thes. 4:13).  He even rereads the Hebrew Scriptures and finds room to mock the once-important-now-impotent death itself:

With that reflection, I threw myself whole-heartedly into designing a show that derided death.  And as Harry, myself, and the rest of the Imps worked together during the winter of 2017, I found myself with plentiful chances to collaborate in ways that witness to the faith that I think makes the most sense out of life both on and off the stage. 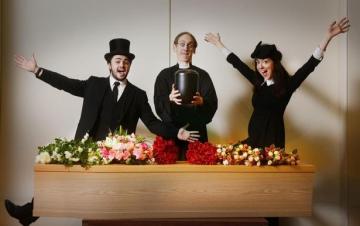 The initial results of our effort were exciting. In early 2017, the show’s first run at the Simpkins Lee Theatre in Oxford was jam-packed with audience members, and the critical review was positive. Most satisfying for me, though, was watching our audience members undergo a more radical transformation than in our normal shows. Groups of people that entered the theatre visibly nervous and uncomfortable were laughing uncontrollably by the end. Each night was like a mini-revival of sensibilities about death that are being lost in a post-Christian culture. Harry said it well in an earlier interview: “Death and dying are things we don’t often talk about, one of the greatest taboos, and as such a really great thing for comedy to bring from the dark places of our mind to the forefront, to shine a light and to have a good old laugh at our fears.”

Now, we have a chance to repeat and enhance our initial design at the Leicester Comedy Festival in February 2019, where we will perform in the cathedral where Richard III is buried. I invite you to come along and mock death with us.

Steven Firmin is a DPhil Candidate in theology, working on Christian approaches to engaging with Islam in the political sphere. He also maintains a strong interest in the intersection between theatre and ethics and performs regularly with the Oxford Imps.