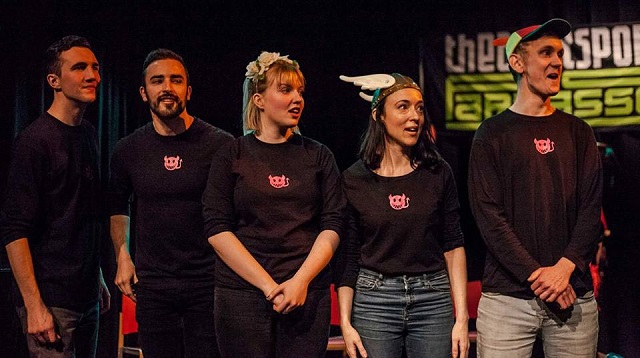 I started the M.Phil in Christian Ethics at Oxford in 2015. If you had asked me then to list things that might help a nascent theological career, I would not have ranked freestyle rapping, improvised Shakespeare plays, or sell out shows at international arts festivals very high on the list. All of that changed when I joined the Oxford Imps, one of the city’s established improvised comedy troupes.

If you don’t know much about improvised comedy, the rules are pretty simple: 1) Prepare nothing ahead of time, 2) Ask the audience for a suggestion - a single word or phrase to inspire the imagination - and 3) Use that suggestion to create with your fellow performers a series of one-off scenes, sketches, songs, and yes, even raps for the audience to enjoy. Thanks to this group of devils, I’ve been able to perform over one hundred times in Oxford and around the world in Scotland, the Netherlands, South Africa, and Swaziland.

I joined the Imps because I enjoyed spending time with the other troupe members and I knew that they would give me a light-hearted break from the serious subject matter that ethics can involve. But I quickly found out that successful improvised comedy relies on a set of skills (one might even dare to call them ‘virtues’) that have use well beyond the stage. These skills, moreover, are not the ones I would have expected. Since improvisation does not allow for prior planning, I assumed like many people that good improvisation relies on personal qualities like creativity and wit. There is some truth to this, but the Imps showed me that teamwork, rather than individual talent, often creates the most fulfilling stories. As a result, improvisation’s real centre of gravity lies within the realm of interpersonal qualities, and two of the most fundamental are sometimes called ‘listening’ and ‘overacceptance.’ “Listening” refers to the skill of hearing what other performers say and allowing it to deeply affect your own perception, attitude, and behaviour on stage. “Overacceptance” is what happens when listening is done well. It is the skill of affirming through your words and actions the realities that other improvisers have created and building upon them to move the story forward. These skills are fundamental to improvisation because the lack of script requires performers to heighten their attention to one another. Every word, action, tone and intimation is a potential gift that can push the story forward.

Naturally, going on stage without a script also heightens the risk of failure. There is no safety net to fall back upon if communication becomes mired or the audience stops laughing. Without this security, there is a temptation for performers to seek solace in their personal creativity and wit rather than returning to the fundamentals of sound communication and team work. This move might generate a laugh or two in the moment, but a continued pattern of such behaviour isolates you from fellow performers. As a result, you either become overly passive, unable to sync your ideas with what is happening on stage, or overly active, dominating your fellow performers by turning them into puppets for your one-person show.

As it turns out, Christian theologians such as Samuel Wells and Kevin Van Hoozer, along with philosophers such as Martha Nussbaum, have begun exploring potential analogies between improvisation and responsible human agency. Given that life, like improvised comedy, is unscripted and therefore full of uncontrollable risks, we face the same temptations to passivity and domination in our day-to-day interactions with others when we feel threatened or vulnerable. Both reactions, according to Christians, are a result of our sinful condition that leaves us incurvatus in se, turned in upon ourselves rather than outwards towards God and others.  Thanks to my experience with the Imps, I was able to advance the analogy between improvisation and human agency in my master’s research, clarifying how disponibilité (the theatrical disposition that combines listening and over acceptance) in improvisation can help us think about how responsible human agency imitates Christ through the power of the Holy Spirit.

So the Imps have changed the way I live and the way I do theology. With every never-before-seen Shakespeare play, I see afresh the danger of living life incurvatus in se, and with each free-style rap I appreciate more deeply the importance of listening to God in prayer, of being attentive to his Word in Scripture, the church, and the world. For this and so much more, I have Oxford’s devils to thank.