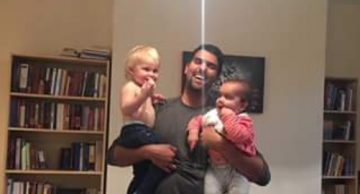 My family and I first met Nabeel Qureshi in the Fall of 2014, when I was assigned as his graduate "parent" at Christ Church, our college in Oxford. Our families connected quickly, and over the next two years they became our closest friends in England.

Nabeel has touched countless people with his preaching, teaching and writing, but my wife and I only realized long after we'd become friends that Nabeel was a public figure. Instead, we knew him day by day as a fellow believer and student—one that was joyful and generous, who combined a seriousness towards truth with a deep-seated and irresistible silliness. No one who knows Nabeel as a public figure will be surprised to hear about the influence of his spiritual life: how remarkably generous he was towards others with his resources, his enthusiasm for worship and praying together, or how frequently he'd text to talk about some part of Scripture or theology. What we were so privileged to know was how human Nabeel was as well; how you'd receive texts from him with pictures and videos of each new thing his daughter would do; how he could move heaven and earth to find time to fit in a board game together; how he'd wake up early with you to write, and then spend all morning trying to distract you with episodes of Homestar Runner.

When a person like Nabeel is struck with such extraordinarily difficult circumstances, we find ourselves re-playing the books of Ecclesiastes and Job in our minds. Perhaps the things that happen in life are just meaningless, or perhaps there's some great sin in the life of the sufferer. The first idea proves too simple. As Lewis writes, if everything was meaningless, the concept of "meaning" would be unintelligible, in the same way that if there were no light in the universe, we would never know it was dark. The second idea simply can't fit the data. Nabeel was not like Job in being without sin, but as far is holiness is concerned, he was the next best thing: he knew he wasn't sinless. He was eager to confess his sins, and he would ask you to help detect sin in his own life, and to pray for him. The flame of the faith in Nabeel's heart was felt by everyone who knew him, and we could no more blame him for his circumstances than we could Job himself.

We are forced, then, from simple answers to hard ones, answers that take us beyond our field of vision. "For as the heavens are higher than the earth, so are My ways higher than your ways, and My thoughts than your thoughts." I think back to the first phone conversation we had after the diagnosis. I remember telling Nabeel that I believed that he would survive, whether by medical or miraculous means; but if I was wrong, what could we do but trust God's plan in such a strange situation, when God has proved himself so faithful to us in all things up to now? As Ravi Zacharias noted in his eulogy, Nabeel joins a cloud of witnesses that have been taken from us earlier than we could have imagined God would call them. Our family thinks of Thérèse of Lisieux, called "the greatest saint of modern times" by Pius X. Surely God would see to it that such an earthly life be long preserved, if only for the sake of her ministry to the world? And yet she departs in obscurity at only age 24, after severe suffering from tuberculosis.

Shortly before her death, Thérèse wrote these words:

"I feel that my mission is about to begin, my mission of making others love God as I love Him, my mission of teaching my little way to souls. If God answers my requests, my heaven will be spent on earth up until the end of the world. Yes, I want to spend my heaven in doing good on earth.”

I cannot know why Nabeel has been taken from us now, but I rejoice that he has gained the great reward that he gave up everything twelve years ago to receive, the pearl that is God himself. And I have hope that, like Thérèse, Nabeel's mission to bring others to love God as he did is just beginning, and that he too will spend his heaven in doing good on earth.