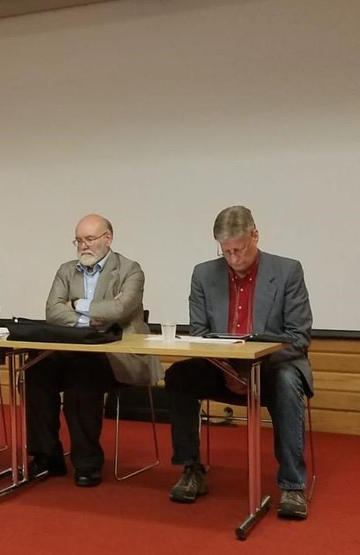 A workshop on the themes of wisdom and ethics in Ancient Jewish and early Christian literature was hosted by the Centre for the Study of the Bible in the Humanities (CBH) at Oriel College, University of Oxford, 4 June 2018. Scholars of all stages from Oxford, Helsinki, Leuven, Zurich, and the United States participated in the day-long workshop, which consisted of nine papers and responses, followed by a concluding panel discussion. The workshop was co-convened by Hindy Najman and John Barton, as a celebration of Prof Barton’s 70th birthday and a means of reflecting on his research (especially his monograph, Ethics in Ancient Israel), as well as Prof Najman’s recent research on “Ethical Reading.”

The day began with a welcome to Oriel College from Sean Power, Director of Development. Konrad Schmid (Zurich) then delivered the first paper, “Beyond Normativity and Description: The Literary Shape of Ethics in Biblical Wisdom Literature,” to which Hindy Najman (Oxford) gave a response. Benjamin Wright (Lehigh) responded on “Joseph and the Limits of Wisdom (Gen 47:13-26).” Eibert Tigchelaar (Leuven) presented on “Wisdom in the Dead Sea Scrolls: She’s No Lady,” and John Screnock (Oxford) responded. Hywel Clifford (Oxford) presented on “Hellenistic-Jewish ekklēsia: Philo’s Allegories on Exclusion from the Assembly (Deut. 23:1-8)”, to which Martin Goodman (Oxford) responded. Elisa Uusimäki (Helsinki) gave a paper entitled “Ancestral Virtue in the Testamentary Literature from the Dead Sea Scrolls,” and Judith Clark (Oxford) offered a response.

Afternoon sessions began with Hans Decker’s (Oxford) presentation, “Real World Ethics in a Perfect World,” followed by a response from Rory Turnbull (Oxford). Arjen Bakker (Oxford) then presented on “Pursuit of Wisdom and Cultivation of the Self in Ancient Judaism,” to which Markus Bockmuehl (Oxford) responded. Mark Edwards (Oxford) gave a paper entitled “Early Christians and Proverbial Literature,” with a response by Olivia Stewart Lester (Oxford). John Barton (Oxford) gave the final paper of the day, entitled “Character Formation in Biblical Wisdom Texts,” to which John Jarick (Oxford) responded.

The day concluded with a panel discussion, which included John Barton, Hindy Najman, Alison Salvesen, and Benjamin Wright. The panel considered the diverse contributions of the day’s papers as they centered around three questions. (1) What are the native terms in Hebrew and Greek for Wisdom and Ethics? How does lexical analysis inform our understanding of these topics? (2) How does the Wiseman, Sage, Scribe or Teacher exemplify wisdom and ethics? Is wisdom repeatable by way of example, through teaching or by the giving of the law? (3) How does Wisdom define bodies of literature (inclusive of canon but also beyond canon)? How does Wisdom influence text collections? All involved enjoyed a rich discussion of the complex themes of wisdom and ethics. 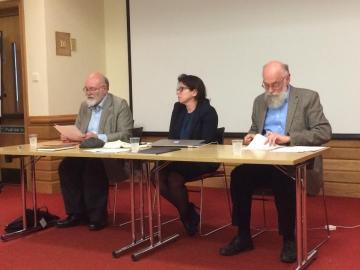 Oriel and Laing Professor of the Interpretation of Holy Scripture