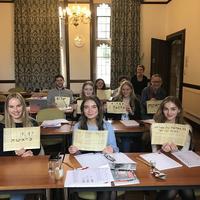 The students were given an insight into the Theology and Religion course at the University of Oxford, with a particular focus on biblical studies and the Hebrew language.

The day began with a talk about Oxford admissions which covered choosing a course, writing personal statements, and interview styles. Next, the students were given the opportunity to explore the College with a current Theology and Religion student from St John’s. The students enjoyed asking questions about all aspects of student life as they looked at typical types of accommodation.

In order to give the students an insight into the teaching methods at the University, much of the day was dedicated to academic sessions. The seminars began with a short lecture in order to set the context for the topic, followed by a lively discussion about the students’ views. The students made use of their A-level knowledge and wider life experiences to offer opinions on the matters at hand.

Within the first seminar, the students learned how to recognise and recite the Hebrew alphabet following a series of interactive games and quizzes. They put their new-found skills to the test with a masterclass in writing Hebrew with bamboo styluses and papyrus.

After lunch in the College’s dining hall, the students attended two more academic taster sessions. The first was led by MPhil student, Ellie Vivian, who introduced the students to the lesser known field of Angelology – the study of angels! She demonstrated how the variety of reception histories have affected the understanding of angels through Abrahamic religions over the past 2000 years. The students remarked how exciting it was to explore beyond the school curriculum and learn about something totally new.

Next, Dr Matthew Mills incited a discussion about Medieval visions of love: comparing the writings of Anselm of Canterbury (d. 1109) with Julian of Norwich (d.1416). His observations considered the meaning of love in the bible, and how the teachings of medieval scholars on love have shaped modern scholarship.

Following an afternoon of deep thought, the students had chance to ask questions to the tutors about studying Theology at Oxford over tea and cake. Finally, before heading home, there was a prize-giving ceremony for the Theology Essay Competition. This year’s winning essay was written by Izzy, a student at Egglescliffe School, who explored whether it was ever possible to understand the Old Testament without a prior understanding of Hebrew.

Comments from the pupils included:

“My favourite part of the visit was learning and experiencing things I had never done before, such as the introduction to Biblical Hebrew”

“My favourite part of the day was the lectures in Biblical Hebrew and Reception History. Not being a Religious Studies student, it was very engaging.”

“I have a better understanding now of what reading Theology at Oxford contains as a course, and I am much more likely to apply.”

Many thanks to everyone involved in making the Theology Study Day an engaging, enlightening and enjoyable event!

St John’s Access and Outreach team will be running several study days in different subjects this year including:

Dates and other subjects will be announced soon.

For those interested in attending, get in touch for more details by emailing access@sjc.ox.ac.uk.