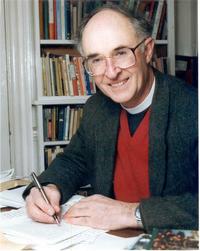 The Revd Canon Trevor Williams, formerly Chaplain and Fellow of Trinity College, Oxford, died in Edinburgh in the early hours of 5 November, 2019

The Revd Professor Paul S. Fiddes offers this tribute, with thanks also to the Revd Robert Morgan.

Trevor Williams was an outstanding example of the kind of Oxford theologian who is now much rarer than in earlier years—a College Chaplain who was also a Fellow in Theology of his College, in his case, Trinity. He combined warm and sensitive pastoral care with expert academic theology in what seemed an easy integration, though it must have cost him time and devotion to achieve this so well. He had already learned this art before arriving in Oxford, combining as he did from 1967–1970 a curacy at St Paul, Clifton, with being assistant chaplain at Bristol University, following his ordination. Further back, his early years were also a fine preparation for the service he offered to church and academy. Trevor was brought up in Uganda, where his father was a CMS missionary and Archdeacon; his maternal grandfather had been Bishop of Mombasa.  After a BA at Jesus College, Oxford, he returned to Uganda where he completed an MA at the University of East Africa in Makerere, Kampala. He offered unwavering support to a Ugandan charity, AICM (African International Christian Ministry) which does a lot of work to meet the material, as well as the spiritual, needs of Ugandan people. In fact, he took two groups of students out to Uganda to help build a medical centre for this charity

During his 35 years teaching in Oxford, from 1970 until his retirement in 2005, Trevor was a Lecturer in Theology of the University as well as College Fellow, and he was always willing to offer tutorials widely, to engage in examining at every level and to take almost unlimited responsibilities on Faculty committees. His manner was quietly charming, courteous and unassuming, but his capabilities were extraordinary. His subject was Modern Theology, and he developed a specialism in the theology of Paul Tillich, offering Faculty seminars in Tillich for over 20 years, and attracting loyal participants from whom he in turn drew out their best. He was typical of a generation of English theologians, and indeed of Oxford Fellow-Chaplains, in building wide-ranging thought about the world and God from multiple disciplines of theology. So his most well-known work, Form and Vitality in the World and God (Oxford University Press, 1985) ranges through Old and New Testament study, the relation of science and religion and the history of doctrine, before showing its extensive engagement with the thought of Paul Tillich. This substantial work is, perhaps, most original in the way that it develops further Tillich’s critique of the way that the modern world makes ultimate “what is less than ultimate”. For him it seemed a pastoral as well as an intellectual concern. His approach in theology and life was to ask what might be an appropriate and coherent Christian confession and then to work out its practical consequences.

After his retirement Trevor continued to live in North Oxford, and despite struggling with ill-health he was always ready to engage in cheerful conversation over a pint at his local. Finally he moved to Edinburgh to live in a care home and to be near family.  The Faculty owes Trevor Williams a large debt for establishing its reputation, as do a long succession of students for his shaping of their outlooks and launching them on their careers.

Trevor’s funeral will be in Edinburgh, with a memorial service at Trinity College, Oxford, in the Spring.

COVID 19 - Your country needs you