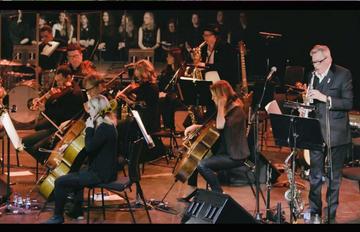 Covid 19 has forced all of us to face new challenges in research, and communicate in new ways in the virtual world. Professor Susan Gillingham, who is Emeritus Professor of the Hebrew Bible in the Faculty and Senior Research Fellow at Worcester College, is Director of the Oxford Psalms Network, an interdisciplinary research group that in 2017 she established with two colleagues in the Faculty of English,  Dr. Francis Leneghan and Dr. Helen Appleton. Since then, the Psalms Network has held around 40 public talks, concerts, poetry readings, interfaith dialogues, and other events, which have all documented the influence of the Book of Psalms on later cultural forms, including poetry, music and art, across Christian, Jewish and Islamic contexts. These events have included, for instance, advising Andy Mackay, a musician from the rock band Roxy Music, for his ‘3Psalms’ concert in November 2018 at the South Bank Centre (pictured), and co-hosting a concert in January 2019 at the Sultan Nazrin Shah Centre, Worcester College, with Howard Goodall, an EMMY, BRIT, and BAFTA award-winning composer. ‘Pelicans, Shepherds and Palaces’ was a unique collaboration of a choral performance with academic talks.  This, and two other similar performances, brought in a combined audience of over 300, many from outside the University.

The Oxford poet Edward Clarke read some of his psalm-based poetry at a TORCH event in May 2018; he recently published A Book of Psalms (Paraclete Press, 2020) which he acknowledges was in part  inspired and influenced by the Psalms Network. The Oxford artist Roger Wagner, another regular attendee, similarly attributed the inspiration of his publication of an illustrated translation of the Psalter to the Network: The Book of Praises was published by Canterbury Press in 2020. The Jewish composer and musician Alexander Massey has also benefited from the Psalms Network, speaking in February 2018 and taking part in a ‘Concert of Psalmody’ in July 2019.

All these events and talks have opened up discussions of the Psalms to the wider public, offering – beyond their usual liturgical and academic discourse –  a deeper appreciation of their appeal through poetry, art and music.  Gillingham has also widely preached and lectured on the Psalms for many churches and Jewish-Christian societies in the Oxford Diocese, as well as frequently at Exeter Cathedral, where she has been Canon Theologian since 2018.

It has not been possible to host public events in 2020-21, but Gillingham has responded by organising events online, where the performance of psalmody through poetry, music and art is in fact much easier to achieve for a much wider public.   In June 2020, she led an online ‘Psalmathon’ with Exeter Cathedral, a continuous reading of all 150 Psalms that lasted nine hours. Some thirty narrators used many English versions, and some also read in Hebrew, Latin, Welsh and German, creating a sense of the broader cultural history of psalmody. Some who survived the nine hours spoke of being able to see for the first time a connectedness in the Psalter as a whole, and others found a new appreciation for those monks from the second century onwards who did this as part of their daily Opus Dei. The full recording is viewable online here.   In September 2020 Gillingham also led an online training day for the clergy and lay ministers for the Diocese of Liverpool, based entirely on the Psalms.  In February 2021 she contributed to the popular online ‘Conversations on the Psalms’ with the artist Roger Wagner and the poet Malcolm Guite based on Psalm 8. She has also frequently used other online platforms, particularly at St Barnabas Church where she serves as a Permanent Deacon, hosted on its YouTube channel.  She is due to speak online on Psalm 119 at the annual Jewish-Christian Forum, Bibelwoche,  organised by the rabbi theologian Jonathan Magonet, and is at present engaged with a Bodleian Libraries Public Engagement Project, which is also online,  on using the Psalms for Faith-Informed Therapy.