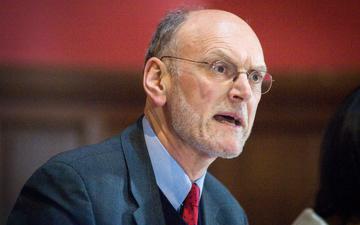 For over a decade, Nigel Biggar (Regius Professor of Moral and Pastoral Theology and Director of the Director of the McDonald Centre for Theology, Ethics, and Public Life) has been researching the Christian ‘just war’ tradition, and the ethics of warfare amidst the political and technological changes of the contemporary world. He has developed his ideas most notably in his bestselling book, In Defence of War (OUP, 2013), and in many other articles and chapters before and since. In these, he has explored a range of subjects, including modern means of warfare, nuclear deterrence, and contemporary military intervention.

Over the last decade, Nigel has spoken on aspects of this research at over 80 public engagements across the UK, Europe and USA since 2014, reaching out to politicians, military leaders, policy think-tanks and the wider public. He has addressed audiences on subjects ranging from the conditions of justified rebellion, through military interventions in Iraq and Syria, to the remembrance of historical wars. His contributions include over twenty contributions to newspapers (e.g. The Times, The Scotsman, The [Glasgow] Herald, The Irish Times), and to military and policy journals (e.g. The Week, Scottish Review, British Army Review). He has lectured at military academies and other defence institutions such as the British Army’s Centre for Historical Analysis and Conflict Research, Camberley; the Royal College of Defence Studies, London; the École Militaire Royale, Brussels; the Führungsakademie, Hamburg; the US Military Academy, Westpoint NY; and the National Defense University, Washington DC. He has also given major talks at policy think tanks in London such as Policy Exchange and the International Institute for Strategic Studies, and at the Foreign Office’s Wilton Park. He has addressed religious audiences in Union Chapel, London; Christ Church Cathedral, Oxford; Salisbury Cathedral; St Patrick’s Cathedral, Dublin; and St Thomas Church, New York. And he has given talks at the National Museum of the Royal Navy, Portsmouth, and at the Athenaeum in London.

Through all these engagements, Nigel’s work has shaped public and political debates about warfare in the modern world, having been used and quoted by think tanks, military officers, politicians, and church leaders. And In Defence of War itself has had great influence in the field. The American political magazine National Review called it “the most consequential defense of the Christian just-war tradition we’ve seen in decades”; and First Things, a web-based theology magazine, called it “a book that changes the state of discussion” and could “get churchmen thinking seriously about war and peace again”.