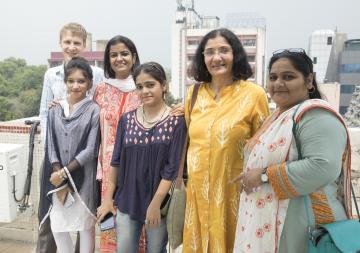 One of the most involving aspects of an academic career in Religious Studies is how it can bring you into contact with some of the world’s major current debates and challenges. My own field is the study of Islam, and I am currently conducting research on Islamic laws on issues of family, such as marriage and divorce. While most of the written material that I look at is over a century old, and sometimes much older, the issues that it covers resonate right into the present day. In particular, the material I study frequently touches upon questions of the rights and treatment of women under Islamic law. Such issues could hardly be more topical. With the forces of feminism (both Western and Islamic) and religious conservatism at loggerheads in much of the world, women’s rights is a subject of intense discussion within Islam. And family laws are often at the heart of these debates, given that women are often those who are most impacted by the ways in which Islamic marriage and divorce laws are interpreted.

My research project recently brought me into contact with one of India’s foremost Islamic feminist organisations, the Bharatiya Muslim Mahila Andolan (Indian Muslim Women’s Movement). Earlier this year, we planned a workshop together in which would hold discussions and share our knowledge about the place of women within Islam, and interpretations of Islamic laws which uphold women’s rights and offer them gender justice and protection.

This workshop went ahead in August. It was rewarding for me, allowing me to meet inspirational and courageous female activists who encounter these issues every day on the ground, and carry harrowing first-hand stories of injustices caused by misinterpretations of these laws. And the workshop was, I hope, enriching in a different way for these activist themselves, giving them the opportunity to converse with academics, writers and others who know these laws from an entirely different perspective.

It was a fortuitous coincidence that the pre-arranged dates of the workshop coincided with a major judgement by India’s Supreme Court. Many months earlier, the BMMA itself had co-filed a petition demanding that the practice of ‘triple-talaq’ – an instant divorce that a Muslim husband could enact at will and immediately upon his wife – should be banned in India. The BMMA was victorious: the Court outlawed the practice, accepting the argument that it was a violation of both women’s constitutional rights to equality, and of Islamic laws themselves. Understandably, the BMMA’s members were all elated throughout our workshop, and also very much emboldened: they are now pushing for further changes to Muslim laws in India.

It has been a genuine privilege, and a rewarding experience both intellectually and personally, to have worked alongside this movement, and to have been a spectator to such important legal victories initiated by Muslim women themselves. You can see one of my recent articles on the instant-divorce issue and its aftermath here.

Associate Professor in Study of Religion