In recent years, there has been huge debate about Muslim marriages and divorces in the United Kingdom, and how far English law should go to accommodate distinctive Islamic practices. For instance, many media and academic voices have raised the issue of marriage registration, with some recent academic studies and broadcasts suggesting that a large proportion of British Muslims only take out nikahs (Muslim marriages) without a parallel civil marriage, meaning that their marriages have no legal standing in the courts. There have similarly been important debates about so-called ‘shari‘ah  councils’, which provide services such as marriage guidance and the issuing of khulahs (Islamic divorces), and are seen by critics as a parallel legal system. There have also been some important cases in the High Court, such as Akhter v. Khan [2018] and its subsequent appeal [2020], which have shown how the judiciary is thinking in creative ways and reassessing how far Muslim marriages can be recognised under English law.

Justin Jones, Associate Professor in the Study of Religion, has been studying Muslim marriages and divorces in various minority jurisdictions, including the UK. This has led to a number of conferences, public-facing workshops and talks, and collaborations with colleagues in universities including Warwick, Birmingham, Tubingen, Erlangen and the Max Planck Institute in Halle. It has also given rise to a number of publications, including two edited collections, on Muslim marriages and divorces in the UK and Europe and Islamic family laws in the wider world respectively. But he and these partners have also made efforts to speak to voices of influence within Muslim communities, and seek to identify possible avenues for accommodation between Islamic and civil laws. 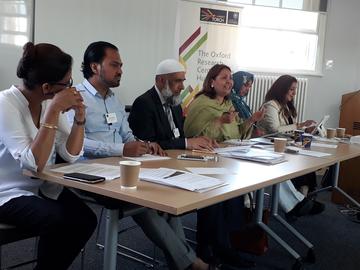 A particularly notable event was a public-facing workshop held in Oxford in 2018 (pictured), at which a number of British Muslim community leaders – including imams, lawyers specialising in Islamic family laws, leaders of Muslim women’s groups and a panellist on a shari‘ah council – came to speak about Muslim marriages and divorces in the UK and possible solutions to current legal dilemmas. A full transcript of the event was serialised on Harvard University’s Islamic Law blog (a complete transcript is available here). The event has provoked considerable discussion and has been picked up by a number of solicitors specialising in family law.