Genesis 6 as a Fairy Tale 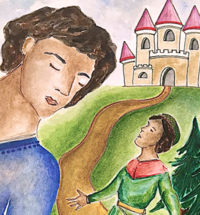 As my first year at Oxford drew to a close and Trinity term slowed to summer snoozing, my Hebrew class and I were given an intriguing assignment. With exams over in 6th week, the last two weeks of term gave apt opportunity to look at some aspects of Hebrew translation we had not yet discussed. To begin with we learnt about Masorah canonisation, then cantillation, and finally various translation theories (all topics which, as a complete Hebrew newbie, I had never learnt about before). For our last assignment, our teacher asked everyone to create a ‘free translation’ from any passage of prose in the Hebrew Bible. Throughout the year we had been working on ‘word-for-word’ translations, but this task focussed more on a ‘sense-for-sense’ rendering of the texts. We were given total freedom as to where to translate from, what style to translate in, and what medium to represent our projects in.

All of my peers took this prompt in wonderfully diverse directions – we had a superb Shakespearian performance of Genesis 45, a recipe book rendition of Genesis 22, and hilarious version of the Ha-Aqedah in the style of P. G. Wodehouse. When the assignment was set, I was very excited and began to think about what I wanted to do. I have always loved art – one of the reasons I chose Theology and Religions at Oxford was due to its multidisciplinary nature which seemed to incorporate all three of my A-level subjects (History, Religious Studies, and Fine Art). For the assignment I thought it would be fun to ‘de-Hebrafy’ a passage of Genesis in the style of a fairy tale. In the true spirit of fairy tales (and because I had quite a bit of time to spare) I decided to paint some watercolour visuals to accompany my translation. When choosing where to translate from, Genesis 6 quickly came to mind – for me, giants naturally lend themselves quite nicely to the fairy tale style!

As I worked on the project, I was interested in how the translations and images worked side by side, impacting interpretation of the text. We can see this at play in some of the earliest codices but even more simply in children’s bible story picture books. Sometimes facial expressions or the body language of characters is present within visual depictions even when the Hebrew itself is less explicit. Images seem to converse with the texts they accompany offering up new dynamics, interpretations, and perhaps modern appropriations of emotional responses.

When getting to know the passage I chose, I faced several issues. In the Hebrew alone, interpretations of Genesis 6:1-8 are challenging. The narrative explains why the Lord wanted to destroy his creation (by the Great Flood), citing the wickedness of his people and their relationships with ‘the sons of God’. There is dispute surrounding many of the actors within the text: who are the sons of man, the sons of God, and the mysterious Nephilim? However, when changing the text into a fairy tale, which required several additions (indicated in purple text) and alterations to the original Hebrew, these issues were heightened and new ones were created. In a visual representation it was less easy to maintain the ambiguity surrounding who actors were – I couldn’t avoid choosing how I wished to interpret the disputed characters. One such issue was how to portray the Nephilim. The Hebrew literally means ‘fallen ones’ and some have taken them to refer to the children of the unions within the passage. However, others interpret them to simply be a group around at the time, independent to the children (‘and they were there…’ is merely a circumstantial detail). Added to this dispute is the Septuagint’s translation of the Nephilim as giants (which may be linked to Numbers 13:32-33). In the second-to-third centuries these giants were taken to be a product of the unusual unions. In my story, I attempted to retain the weight of this dilemma despite having to decide on how to physically portray the characters. I made the giants and the children of the unions two separate groups but merged them in a spatial capacity (I made them one ‘settlement’). The free translation allowed me to readily apply ‘artistic licence’!

Despite creating quite an un-Orthodox reading of Genesis 6, the exercise taught me many lessons. I enjoyed the freedom that came with a ‘sense-for-sense’ translation and I noticed more acutely the many Hebrew phraseologies we adopt in English translations. The assignment was a creative way to end what has been a very rewarding year of Hebrew classes at the university.