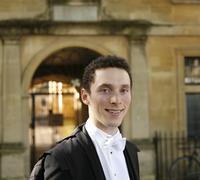 Blackfriars Hall and the Faculty of Theology and Religion at Oxford University are very pleased to announce the first recipient of the new Scovil Scholarship.

Liam McDonnell has been studying for an MSt in Medieval Studies at Blackfriars in the academic year 2018–19. His dissertation was on involuntary ignorance of revelation and salvation, comparing and contrasting Abelard with Aquinas. Prior to arriving at Blackfriars, he attended St Edward’s College, Liverpool, then studied Medieval History and Theological Studies at the University of St Andrews 2014–18, graduating with First Class honours. His dissertation was on divine impassibility (i.e. whether God is able to experience suffering) with particular reference to Thomas Aquinas, for which he won the Gray prize for the best theological essay of the year at St Andrews, as well as the Hope Trust award for Church History.

Liam’s doctoral studies proposal, for which he was awarded the Scovil Scholarship, intends to revisit the question of divine impassibility, focusing on Aquinas and Augustine, and arguing that modern critics of their position do not properly acknowledge the nuance of their views. Augustine and Aquinas believed that, by virtue of the incarnation, God is both passible and impassible. In other words, in different respects, God can both suffer and yet be free from suffering. There is much to commend this position, which takes into account the mystery of the Incarnation, rather than crudely affirming that God is either passible or impassible in an unqualified sense.

Liam is an active participant of the wider Blackfriars’ community: he is a member of the Blackfriars schola choir and serves on the committee of the Oxford chapter of the Thomistic Institute.

“Leading Beyond the Crisis”