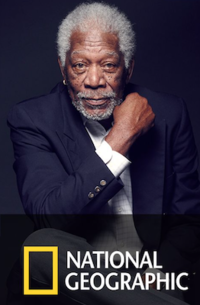 Dafydd Mills Daniel will be appearing in The Story of God with Morgan Freeman, broadcast on the National Geographic Channel on 12 May at 10pm.

First recorded in the 17th century by the Oxford antiquarian and biographer, John Aubrey, Sin-Eating survived in the Welsh Marches into the 20th century, when a wealthy farmer, named Richard Munslow, revived the practice.

A Sin-Eater would consume food regarded as contaminated by another person's sin, and, in doing so, take on the sins of that person.

Through reconstructions of the Sin-Eating ceremony, and by visiting the home and grave of Munslow, Dafydd, presenter Sal Masekela, and Morgan Freeman, reflect on the beliefs that underpinned the practice of Sin-Eating, and ask why anyone would choose to consume another person's sin.

An excerpt from the episode can be found here: