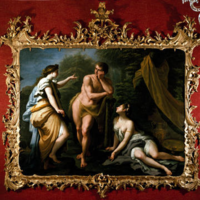 As part of the Talking Emotions project at the Ashmolean Museum, Dr Dafydd Mills Daniel has produced the podcast: Passion and Painting, Beauty and Virtue

In the podcast, Dafydd discusses the relationship between aesthetics and ethics, art and morality, in Paolo de Mattheis' painting, The Choice of Hercules (1712) – a painting which now hangs in the Ashmolean Museum, but which was originally commissioned by the 17th/18th century philosopher, Lord Shaftesbury.

As Dafydd points out, Shaftesbury not only helped to found the field of aesthetics, and sentimentalism as an ethical theory, he can also be regarded as ‘the first popular philosopher’: he wrote philosophy about, and for, the public, and, in doing so, was instrumental in developing the modern understanding of the public, including such social ideals as patriotism, civility, and politeness.

Consequently, in a TORCH blog that accompanies his podcast, Dafydd explains why the object he has chosen for his Talking Emotions podcast – Shaftesbury’s and de Mattheis’ painting, The Choice of Hercules – was also recommended by the second president of the USA, John Adams, for the United States Great Seal: Talking Emotions: The ‘Sentimental’ Ashmolean Painting that was nearly the Great Seal of the United States

For more information about the Talking Emotions project at the Ashmolean Museum, of which Dafydd’s podcast and blog form a part, click here and here.

And, for the other Talking Emotions podcasts, on a wide array of Ashmolean Museum objects and artefacts, click here.