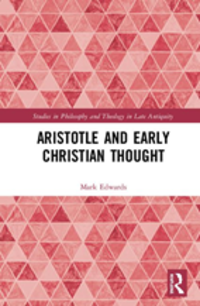 Studies in Philosophy and Theology in Late Antiquity

The book discussion will take place on Tuesday 14 May 2019, at 5.00 pm, in the Seminar room, Corpus Christi College, with the participation of the author and four colleagues who will comment on the book:

After the seminar all participants will be most welcome to join the speakers for drinks.

In studies of early Christian thought, ‘philosophy’ is often a synonym for ‘Platonism’, or at most for ‘Platonism and Stoicism’. However, it was Aristotle who, from the sixth century AD to the Italian Renaissance, was the dominant Greek voice in Christian, Muslim and Jewish philosophy.

Aristotle and Early Christian Thought is the first book in English to give a synoptic account of the slow appropriation of Aristotelian thought in the Christian world from the second to the sixth century. Concentrating on the great theological topics – creation, the soul, the Trinity, and Christology – it makes full use of modern scholarship on the Peripatetic tradition after Aristotle, explaining the significance of Neoplatonism as a mediator of Aristotelian logic. While stressing the fidelity of Christian thinkers to biblical presuppositions which were not shared by the Greek schools, it also describes their attempts to overcome the pagan objections to biblical teachings by a consistent use of Aristotelian principles, and follows their application of these principles to matters which lay outside the purview of Aristotle himself.