Abrahamic Seminar and Trip to Israel

Sacred Space in the Abrahamic Religions

Abrahamic Seminar and Trip to Israel: Sacred Space in the Abrahamic Religions 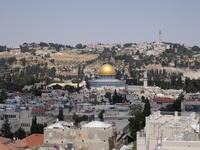 In a 1967 lecture, Michel Foucault famously argued that whereas the 19th century had been dominated by a focus on history and time, the present era was marked by a turn to space:  “we are in the epoch of simultaneity: we are in the epoch of juxtaposition, the epoch of the near and far, of the side-by-side, of the dispersed” [“Of Other Spaces,” Diacritics 16:1 (1986)]. During Hilary and Trinity 2019, the Abrahamic Seminar convened both near and far, in Oxford and Be’er Sheva, Israel, examining the theme of “sacred space in the Abrahamic religions.” The meetings at once attended to some of the questions signalled by Foucault and demonstrated that such a preoccupation with space is far from an exclusively 20th century phenomenon.

Convened by Professor Anna Sapir Abulafia and Dr Martin Whittingham, the Abrahamic Seminar began with weekly Hilary lectures and discussions, led by both Oxford academics and guest speakers. The presentation topics ranged from the spatial imagery in Augustine’s thought to an economic analysis of the intersecting power structures of Muslim shrines in Pakistan. This diversity was mirrored by the research interests of the participating DPhil and Master’s students, who came from departments spanning Theology and Religion, History, English, Classics and the Oriental Institute. Investigating the multiple levels on which space functions – from the embodied to the imagined – the group questioned what it truly means to share space; from inter-religious instances of community facilities serving different gendered groups, to the intra-religious “competitive sharing” of contested sacred sites.

In Trinity term, the group travelled to Be’er Sheva to participate in a workshop with the Center for the Study of Conversion and Inter-Religious Encounters at Ben Gurion University of the Negev. Across two full days, the DPhil students from Oxford gave presentations alongside fellows of the Center, wherein many common threads evolved. A rich interdisciplinary forum, the workshop raised questions on topics such as the function of time within sacred space, and how perspective both conditions and curtails what may be seen of a given space. Such discussions of the notion of perspective, as well as several presentations exploring religious encounters with individual sacred sites in Jerusalem, also ensured that the workshop prepared the group for the concluding event, a day visit to Jerusalem led by Professor Jackie Feldman, a scholar of pilgrimage and tourism.

Foucault’s description of the contemporary spatial consciousness concerning juxtapositions of the “near and far” and “side by side” could well be engaged in analysis of the great gulfs between geographically proximate sites in Jerusalem, and the distinct paths traced across it by diverse religious communities. Our experiences in Jerusalem were not limited to the horizontal dimension however, but also invited awareness of the profound verticality of the city, from the archaeological overlaying of different religious sites, to the looming height of the Temple Mount and the multiple domes and spires dotting the landscape. The day in Jerusalem animated many of the questions that had crystallized during our conversations across the preceding days and months, not least how the multi-dimensionality of sacred space is something created by human bodies, behaviours and imaginations over time.